Pictures From The Real World 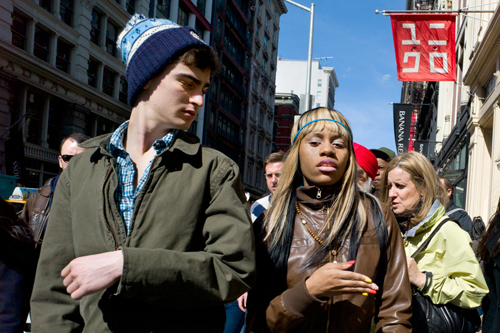 A 2-day street photography workshop with iN-PUBLiC founding member Richard Bram of New York and Washington DC photographer Chris Suspect of STRATA street photography collective will be a unique opportunity to explore the history, aesthetics and practical techniques of shooting on the street while challenging you to expand and explore your own individual style. Combining theory and in-the-street shooting, this workshop will enable you to put your skills to the test followed by a group review of your best shots. The workshop will be limited to 15 participants.

WHO IS IT FOR?

A digital camera and an interest in street photography is the first requirement. The workshop is not concerned with the difference between "beginners" or "advanced" street photographers. Because the workshop will focus more on style rather than equipment and technique, you should have some experience taking photos in the streets. All will be welcome within a supportive group atmosphere of like-minded photographers. If you also currently have ideas and street photography projects you'd like to pursue but find yourself lacking direction, this workshop is for you to find further guidance on how to realize them.

The first meeting on Saturday, 2 May, will be a review of participants’ portfolios, a discussion of what street photography is and is not, techniques, ethics, and other topics. Monday and Tuesday, 4-5 May, will be the main workshop days, beginning with a brief meeting before going out out into the streets of Tbilisi, breaking up into small groups or individually to shoot with Richard & Chris. At the end of each day, we will meet and discuss the day’s work and make suggestions for the next. In the early afternoon we will rendezvous and edit all of the photographs of each participant. Here the importance of editing and recognizing one’s best photos will be the topic. We will help to find the best of the participants' photographs to be combined into a presentation to KOLGA on Wednesday evening.

Born in Philadelphia, U.S.A., in 1952, Richard Bram grew up in Ohio, Utah and Arizona. A series of lack-lustre jobs led him across the country to Louisville, Kentucky, where in 1984 he lost his head and became a professional photographer, building his early practice in public relations, public events, performance and portrait work. Among many highlights of this phase of his career was for 12 years being the official photographer for both the Kentucky Derby Festival and the Louisville Orchestra. Moving to London in 1997, Bram concentrated on street photography, working with classical musicians, and other personal photographic projects. There in 2001 Bram became one of the founding members of iN-PUBLiC.com, the premiere international street photographers' collective, arguably the catalyst for the great contemporary revival of the genre.

Returning to the States in 2008, Bram now lives in New York City and continues to work in the public arena of the street.

Bram’s work has been seen in over 20 solo exhibitions through the years in locations as diverse as America, Germany, Lithuania, Mexico, Scotland, and England as well as group exhibitions around the globe. In 2011 Bram curated “From Distant Streets,” an exhibition of 29 international street photographers at Galerie Hertz in Louisville. As well being regularly published in magazines both traditional and digital, he regularly writes and lectures on Street Photography, most recently at “Street Parade,” part of the 2014 Paris “Mois de la Photo.” He has given Street Photography workshops in such diverse locations as the Tate Modern and Tate Liverpool in the UK, New York, Bangkok, Tel Aviv, as well as the 2012 KOLGA Tbilisi Photo Festival. His work is in institutional, corporate, and personal collections, including the Museum of London, the Museum of the City of New York, Bibliothèque nationale de France, the National Endowment for the Arts in Wasnhington, DC, the George Eastman House/International Museum of Photography and the University of Louisville Photographic Archives.

The son of a diplomat, Chris Suspect was born in the Philippines in 1968. He is a street and documentary photographer hailing from the Washington, D.C. area. He specializes in capturing absurd and profound moments in the quotidian. His street photography work has been recognized internationally and has been exhibited in Miami, Germany and the United Kingdom. His documentary work on the underground music scene in Washington, D.C., was published as a book, Suspect Device, by Empty Stretch in 2014 and was a featured exhibit in the Leica Galerie at Photokina 2014 in Koln, Germany. The work is currently held in the Leica Galerie Archives. Since 2012 he has been a member of the STRATA photo collective, focussing on street photography and located in Washington, D.C. and Los Angeles.

Suspect’s work has recently been featured in the Huffington Post, Photo District News and on the Leica Camera Blog. He also has published photographs in the Washington Post, Washington City Paper, CNN, The Atlantic, Forbes and many other media outlets in the US, Germany, Canada and Brazil.